You are here: Home / Family / On Oral Care Routines with Preschoolers

One of the surprising things I learned when Dentist Dr Janet Tamo spoke during the daylong P&G Mom event, was that we should be brushing our kids teeth FOR THEM until they are 7 or 8 years old. Little Miss Five Years Old has begun brushing her own teeth, under supervision. What we do is we alternate, one time mom brushes her teeth, one time Rainbow does it while I watch, sing Twinkle Twinkle and applaud.  The problem is her three year old younger sister watches this and wants to do her teeth on her own too. The compromise? We take turns brushing Rocket’s teeth, all in one sitting. I brush the left side, she brushes the left side, rinse and repeat. (Um…  yeah, some days the amount of time I put into this bedtime routine has me ready to scream and run out of the bathroom, I won’t lie. )

Over the past year, since Hubby and I have each started using electric toothbrushes, we’ve both noticed an improvement in oral health. aka electric toothbrushes rock, so why aren’t I using one with my kids? So I was excited to try out the Oral-B Pro-Health for Me Vitality electric toothbrush with Rainbow. The packaging says for ages 8 and up. However I had read that children can start using an electric toothbrush as early as age three when assisted/supervised, and I thought that at 5 years old she might be ready to make the switch.

I showed Rainbow the toothbrush, still in it’s package, and she squealed with glee when I told her it was for her. “Is it a motivation one that moves by itself?” I explained that the word she was looking for was motorized. But for her it really is a “motivation” toothbrush. She loves having a “big people brush”, one that is just like mommy and daddy’s. So much so that she wants to brush her teeth 3, 4 or even 6 times a day. (Um… you go ahead and do it on your own this time hun.) 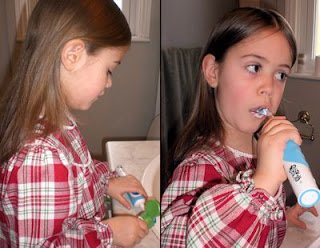 I love that the Oral-B Pro-Health for Me Vitality electric toothbrush is rechargeable. The fact that it includes a replacement head makes it seem like a fair value at it’s suggested retail of $29.99. Despite being rechargeable, it’s not too big or heavy for little hands to hold. I also love the built in timer. In the past I had a hard time explaining to Rainbow how she needed to brush her teeth for two whole minutes. How long is two minutes? We equated it to four repetitions of Twinkle Twinkle Little Star. However no matter how many times I try to explain that she could sing it in her head, Rainbow insisted on singing Twinkle Twinkle aloud WHILE brushing her teeth, which is … um… splattery.  (I know, I know there are toothbrush timers on the market. I’ve been meaning to get one, this eliminated the need.)

And then there’s flossing… I know how important flossing is to remove plaque and food from between the teeth, where a toothbrush can’t reach. Hubby prefers those little dental pic things, while I feel I have better control while using a floss, like Crest Glide. At five years old Rainbow loves to have her teeth flossed. She literally begs me to do it. Rocket on the other hand hates anything that involves having to hold still for longer than 1.5 seconds. Flossing her teeth is literally impossible. I give it a shot every few weeks, and then throw my hands up and admit defeat, for now. (Have any tips for how to floss with a squirmy preschooler? I’d love to hear them.)

For further info Oral-B products and on dental care for kids check out the Oral-B website, or connect with Oral-B on Facebook.

Disclosure:
I’m a P&G Mom, and as such I receive products and special access to P&G events and opportunities. As always the opinions on this blog are my own.

The One Where I Admit to Eavesdropping on My Kids… 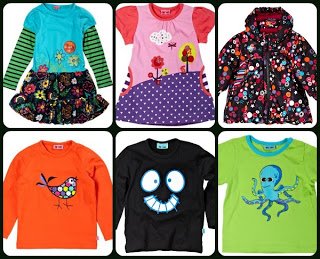 Looking for Cute Clothes to Tuck Under the Tree? Try beansprout.ca!