You are here: Home / Family / Bending the Rules and Changing our Bedtime Routines, #5MoreMinutes with @Netflix_CA

When my kids are home sick from school it’s often Netflix to the rescue. No news here, I’ve written many times about how sniffles and snuggly blankets on the couch go hand in hand. So when the latest batch of nasty germs started making it’s way around our household plenty of children’s shows on Netflix of course helped to pass the icky time.

The big kid was sick for a few days. I was sick for a few days. My husband and my youngest daughter on the other hand got hit hard. Hubby is still recuperating, while Rocket has missed nine days of school. As usual I played the Netflix card, and part of each day was spent snuggled up on the couch, while various Disney movies played and I made half-hearted attempts at working online (it is surprisingly hard to type while a miserable five year old is trying to wrap herself in your arms and crawl into your lap). I was excited to see a few Disney movies that had previously left Netflix were back; The Rescuers, The Fox and the Hound, The Aristocats, Lilo and Stitch, The Princess and the Frog.

For several days in a row our day looked something like this:
* get big sister to the bus
* try and coax Rocket to eat something, anything
* say “Yes, we will watch Netflix just as soon as mommy is done doing x.”
* attempt to do household chores while increasingly cranky five year old reads or colours
* give in and head to couch for movie snuggle time
* watch one Disney movie
* when it’s done, child wants to watch another 1400 movies
* coerce child into heading upstairs for lunch
* attempt to get child to eat anything
* declare it is naptime
* spend upwards of half an hour convincing child it is nap time
* find perfect doll and perfect napping spot
* read a storybook (or four)
* attempt to get child to fall asleep (and quite possible fall asleep myself, whether I intended to or not)
* wake up in time to go get Rainbow from the bus
* doing all the usual after school stuff, snacks, homework, cleanup, etc
* do dinner type stuff
* get ready for bedtime

As we hit the bedtime routine part of the day I kept running into a snag. When coercing her into getting off the couch I had told Rocket, “We are going to go and eat lunch and take a nap.” While she kept weedling for more TV, “Just one more show, pleeeeeeeease.” I would insist that we were going upstairs to eat. She would ask if we would come back and watch more TV later, and I would say “Maybe.” Which wasn’t quite a lie. I didn’t know how long lunch plus naptime would run, and if we were done eating and resting and it wasn’t bus pick up time, then sure, we would watch a bit more TV.

However nap time, and the cohersion dance leading up to it, always ended up taking up the entire afternoon. So now as bedtime rolls around, Rocket remembers that she had wanted to go and watch more TV, and that we never got around to it. She gets upset and begs for TV instead of her usual bedtime story. Keep in mind this is a snotty, feverish, whiny, miserable kid. My youngest daughter is stubborn and can be hard to negotiate with at the best of times, and this was most certainly not the best of times.

A few days prior Netflix had emailed me with their writing prompt for the month, letting me know about the new Five Minute Dinotrux episodes. They asked me to write about bedtime battles, and about solving them with “just one more episode”. I laughed at the idea. I thought, wow, that would never fly in my house. For one, the girls always want books, not TV, for bedtime. More importantly they would never fall for a five minute TV show. Heck, I have to pry them off the couch with threats and bribes after a full twenty-some minute episode. They usually need to watch at least three full episodes, minimum, before I can even begin to convince them they’ve seen enough TV. 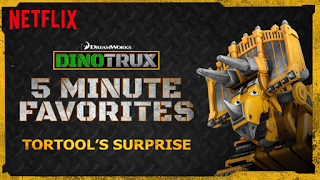 However here I was with this sick kid who was begging me for TV instead of a bedtime story… and it was worth a shot, right? So I grabbed my laptop. got the girl all snuggled into her bed said, “Okay here’s the deal, we’ll watch ONE show, but mom gets to pick it.” We watched one five minute episode of Dinotrux, Rocket said thank you, kissed me goodnight and went right to bed. You could have knocked me over with a feather. I thought, wow, poor kid, she must be really sick. Then the next night we did the exact same thing, except this time big sister was in on the act. I thought for sure the eight year old would complain that the episode was only five minutes long. But nope. Everything was smooth, all silence and smiles and cooperation.

For three nights in a row those darn five minute episodes saved the day, and then everyone was starting to feel better and we went back to our regular chapter book routine. I was shocked by how well those mini-episodes worked. I highly suspect a big part of why it worked so smoothly was that I brought the TV viewing right into the snuggly bed, as opposed to watching on the couch and then moving upstairs. Yay for streaming! Basically, I’d say if you are sick of the whole bedtime battle thing try it. Definitely in a pinch, try it. Oh and also, Dinotrux is a very cute show. Dinosaurs plus construction vehicles, really can’t go wrong there. Well at least according to my five year old.


How about you guys? How much do you bend the rules and routine when your little ones are sick? 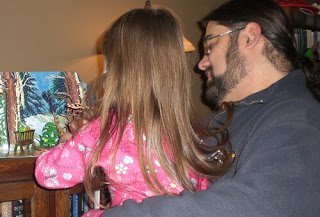