You are here: Home / Family / Parenting / No Kids Allowed….

When I was pregnant with our first child my husband had the idea that our children would never set foot in our basement.  The basement contains our gaming area, full of my husbands large collection of books, board games and miniatures.  How would we keep little fingers out of all those dangerous, breakable, little pieces?  Simple. We would tell them there was a child eating monster living in the basement, and no one under the age of 18 was safe to enter.  I thought he was joking. I laughed.  I looked at his face to see he was dead serious. “What, like it’s any worse than lying about the Easter Bunny?!”

Once Rainbow was actually here, we found it impractical to keep her from the bottom floor, as our couch and TV are in the carpeted corner of the basement.  The rule became that she was allowed downstairs, but was not to set foot off the carpet.  And somehow it worked. The desire to be allowed to watch TV kept her firmly on the correct side of the invisible wall drawn along the edge of the carpet and the tile. As she’s gotten older, I’ve been able to leave her alone watching TV, while I do laundry in the other room, or even run up to the ground floor for a few minutes, and she stays on the carpet.

Now, all of a sudden, all bets are off, as she keeps sneaking into the basement on her own. While I am changing or nursing the baby, Rainbow will fiddle with the gate and head downstairs. I finish up with the babe to find my older child is nowhere in sight. I call her name and she doesn’t answer. I search around only to find her once again down in the forbidden basement.  This has happened like six times in the past week or so.  Coupled with the fact that she now thinks it’s hilarious to hide quietly instead of answering when I call her, it can be rather frightening.

The other day I came downstairs looking for her only to find that she had demolished all of the leftover junk food left out from our roleplaying game the night before.  The same child that has issues with taking over an hour and a half to eat a meal, managed to devour half a bag of ketchup chips, a cup of M&Ms and three chocolate chip cookies in under six minutes. Not only had she eaten two months worth of junk food in one go, but when I got down there she was no where in sight.  She popped out of the danger filled laundry room and when I demanded to know what the heck she was doing in there would only answer that she was “Just looking with her eyes.”

I have tried “time out” and other various punishments such as taking away TV privileges, but she continues to sneak downstairs and get into trouble.  There is a gate barring her way, but sometimes we forget to latch it shut and at other times she has figured out that if she shimmies it enough she can pop it open.

So one night last week after my husband got home we were sitting together with the kids and having a bit of a family discussion.  We were discussing various possible solutions, and we asked Rainbow, “What do you think we should do?  What do we need to do to make you remember not to go in the basement?”  She tapped her finger on her chin and said, “Hmm… let me think…. Wait, I know! You should make a sign!  One that says, No kids without moms. And when I read it, I’ll remember not to go downstairs.”  I tried hard to keep a straight face but I just couldn’t do it. I laughed. My husband got up and left the room and went on the computer. I told my daughter, “You want a sign?  How about the baby gate? That’s a sign! It says You Can’t Go Past Here. Trouble! You shouldn’t open that gate and you shouldn’t step through it.”  There, end of discussion.

I was a little miffed at my husband for walking off in the middle of our family talk, but then I found that he was actually in the computer room fiddling around on Adobe photoshop making our daughter a sign.  He then took her in the kitchen and had her help him hang it in the stairway. And you know what? It worked. The next day Rainbow told me, “I got up in the morning and I went through the gate into the kitchen…. but then I saw the sign and I remembered. So instead of going downstairs I came upstairs and woke you.”  You did what kid? Seriously?  Sometimes my husband can be an awesome Dad. Maybe we should have just went with that child-eating monster story all along. 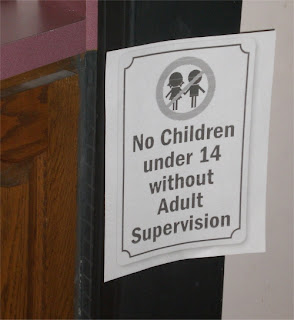 Cold and Flu Season Has Arrived, Fight Back with Shoppers Drug Mart