It was the afternoon of our second day at Blue Mountain. We had just finished up at Plunge Aquatic Centre and by this point, the littlest one was pretty tuckered out. So Mimi took her back to the hotel room for a nap, while the big kid and I decided to go check out the Ridge Runner Mountain Coaster.

Despite the fact that I ended up riding on it three times, I’m at a bit of a loss as to how to describe the Ridge Runner. Perhaps I should just go with my daughter’s description and say it was, “Awesome, awesome, awesome!”

Our first ride on the Ridge Runner, I had my purse in the cart with me. A messenger style bag, which was over my neck and sort of placed up against my belly. I had carefully tucked my long hair down inside the back of my shirt. But I didn’t give a second thought to my purse. The attendant who helped the two of us into the cart had asked if it was our first time riding and had given us the overview, how to break, how to make the cart go faster.  I think maybe they should have also noticed my bag and said something, like, “Hey crazy lady you don’t want to ride this with a bag around your neck.” Instead, they said, “You just got on at the perfect time! There’s no one ahead of you, so you can go as fast as you want.” 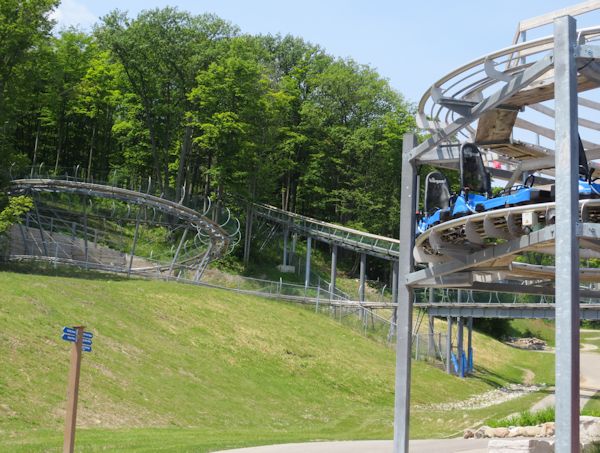 Kids ages three and up are welcome to ride with an adult, provided they meet the minimum height requirement. So G-Girl and I were together in one cart. I was in the back “drivers” spot, and she was in the front seat, sort of between my legs. The controls were simple, push down all the way to go as fast as possible, pull up all the way to brake. The attendant had made the rules clear: Only brake in case of emergency. Don’t bump the cart ahead of you.

From reading the description in the guidebook, I somehow had it in my mind that this was going to be more of a sightseeing ride than a “coaster” ride.  The book mentioned the view out over the Georgian Bay and the fact that you could control the speed of your cart, which maxes out at 42 km/hour. And, well, that sounded pretty tame to me. Prior to actually seeing the ride, I had even had this completely ridiculous idea that I was going to take photos while riding the coaster.

…an exhilarating trip through the escarpment’s varied terrain and thrilling glades for over a kilometre downhill. The driver takes control of their own speed travelling down the track with access to a manual brake…. Take a scenic ride down the mountain to enjoy views of Georgian Bay and the Niagara Escarpment, your trip will be one to remember!

Once we were actually on the Ridge Runner, things were a little different then I had imagined. Gracie and I enjoyed the view as the cart made the relatively slow and steep ascent through the trees, up the mountainside. You could look off to the right and get a good view of the Timber Challenge High Ropes course, you could hear the sound of a brook babbling. It was sort of peaceful. Yet even on that calm and slow ride up the mountain, there was certainly no way I could have taken photos as both of my arms were down at the sides of the cart pushing on the two levers that controlled our speed. 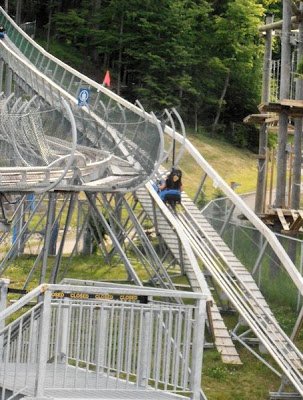 As our car climbed straight up the mountain I saw other carts go whizzing past, I saw the loopy track off to either side, and I started to have a pretty good idea of what we were in for. Hmm.. As fast as I want, eh? How about as slow as possible without hitting the breaks? Realizing that the purse I had tucked up against my body wasn’t even shut, I pushed down on the lever with just one hand and frantically used my teeth to pull the zipper shut on my bag. I also warned Grace that the ride up ahead was about to get a little crazy. My daughter had never been on a roller coaster before. Not even a tame kiddy version. So I worried what her reaction would be.

We got to the top of the mountain and two attendants smiled and waved us on saying, “Remember not to break.” And then we zoomed, we zipped and we bumped along. My daughter was screaming, a panicky sort of “Ohhhhhhhhhhhh, Ahhhhhhh, MOM!!” chant. If there was a fantastic view of the Georgian Bay I certainly never noticed it, my eyes were glued to the track ahead, and despite my attempts to take it slow, we were going at a pretty decent clip. The centrifugal force pulled my bag out away from my body and I panicked in discomfort as my purse hung around my neck at a forty-five-degree angle. As much as I wanted to go slow, I was also sort of terrified of pulling the lever up too far and breaking by mistake. As we raced down the mountain I muttered soothing things at my kid, “It’s ok. It’s ok. Almost done.”

We slammed through the last curve and started to slow down as we came to the end of the line. My daughter squealed. I felt like I was quite possibly the worst mother ever. Here I was taking my five-year-old on a coaster, scaring the pants off of her and probably scarring her for life. We climbed out of the cart and my girl stood there trembling. Only I quickly realized it was not with fear, but rather with a combination of adrenaline and excitement. “Can we do it again?” she asked, and then jumping up and down she added in “That was AWESOME. It was Awesome, Awesome, AWESOME!!”

I loved that moment. The pure joy and excitement on her face as she jumped up and down. So, of course, we did do it again. Only first we walked back to the hotel room and stashed my darn purse. (Though I should mention I later noticed there were lockers at the start of the ride that I could have left my bag in.) We also came back the next day and Grace rode on the Ridge Runner with her Mimi, twice. And then once more with me. She went on the ride five times overall. Each time she wailed, yelling to go slower. Later she confided in me, “Umm… Mom, when I was screaming on the mountain coaster… those were my happy screams. It was a scary-good-woah-wow sort of thing.”

And maybe that’s the description I’ll go with, “Scary-good-wow.” Riding down the mountain, zipping through the trees; it made for such a unique experience. I loved the way you were somewhat in control of the cart. Though I rode on it three times, I never pushed it out to the max speed. At the end of the day, we had one ride ticket left and I flirted with the idea of going for a solo run at top speeds, but the three-year-old, who wasn’t quite tall enough to go on the ride, was starting to get pretty grumpy with waiting for other people. Maybe next time.

Overall, it was a fun, exhilarating and unique experience. If you’re at Blue Mountain I definitely recommend taking a ride on the Ridge Runner Mountain Coaster (just be sure to leave your bags behind). Awesome. Awesome. AWESOME.

Want to take a ride on the Ridge Runner yourself? Have you ever been? Tell me all about it in the comments.
Disclosure: My family was invited to visit Blue Mountain as part of their Family Blogger Retreat. We stayed at the Westin Trillium House and enjoyed three days as guests of Blue Mountain Resorts. We were given tickets to ride on the Ridge Runner Mountain Coaster as part of our stay. As always, my words and opinions are my own. 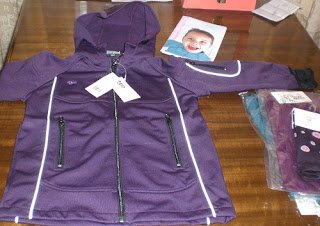 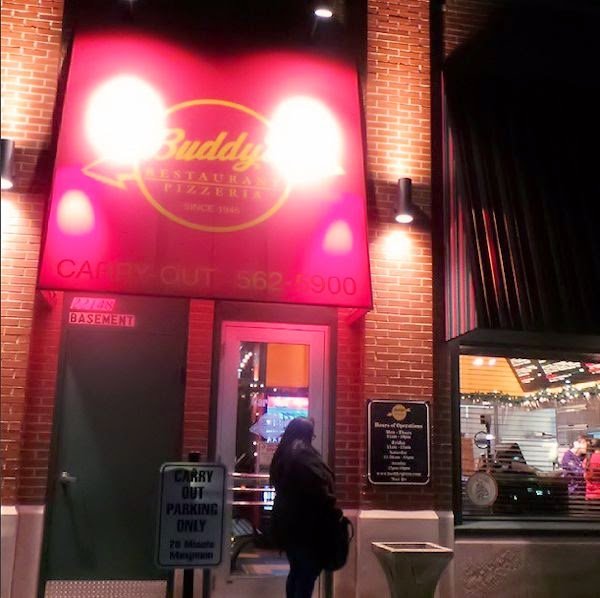 Buddy’s Pizza in Dearborn, Totally Worth Crossing the Border For 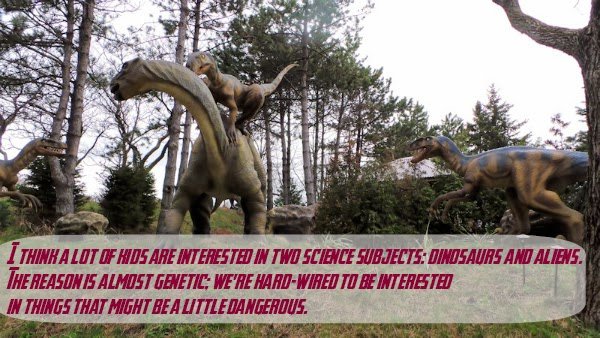