You are here: Home / Family / Family Travel / The Porter Difference, What the heck is that exactly?

There have been times when I’ve been heading to Toronto for a blogger event where a brand or company has offered to pay for my travel and I’ve always insisted on taking the train.

“But, you could fly?!” they would say. They point out that the flight is only 45 minutes — the train takes 4 hours.

“We would fly you on Porter.”, they’d say, as if that were something special, as if that would change my mind.

“Oh, wait, I understand, you must be afraid to fly.”, they’d inevitably say. No. I just LIKE taking the train.

“Ohh… they offered to send you on Porter?”, my blogger friends would say, ohhhhing and awwwing as if that were something special, as if that could somehow compare to cozy seats, coffee, and wifi and time and space to write.

“Porter is really nice.”, they’d say, in disbelief that I would turn such a treat down.

Over the past few years, it’s come up often enough and people have oohed and ahhed over Porter enough that I’ve become curious. Why do people keep going on about this? What the heck is so special about Porter? What’s the Porter difference?

Well, I finally took a flight with them and I figured out what all the hoopla is about.

I was invited to fly with Porter into Melbourne, Florida, for a whirlwind 26-hour press trip. (We went to the beach, we went kayaking, we visited the Exploration Tower at Cape Canaveral. We spent the evening at Walt Disney World. The whole thing was crazy, fast, non-stop fun.)

As I was getting ready to leave Windsor, I found myself wondering about that magical Porter difference. “It’s supposed to be quite nice.”, I told my husband as he drove me to the airport. “How so?”, he asked. “Hm. Don’t really know. But everyone says so. Quite nice.”

And it really was — quite nice that is. The flight from Windsor to Toronto is so brief that they didn’t really have time to wow me. But the seats were comfortable and we were offered a quick snack and a drink while the plane was up in the air.

I’ve got some medical issues going on, which means I’ve given up on alcohol for the moment. So I went with a ginger ale, but I could’ve had something stronger as complimentary alcoholic beverages are included with the flight.

It was my first time flying into Billy Bishop airport. I didn’t realize that it’s actually out on an island, so that’s kind of neat. The view as we flew into Toronto harbour was pretty spectacular. The sun had set by that point and it was all bright lights, silhouettes and reflections in the water — quite pretty. Landing and then walking underground (underwater!) from the island to the mainland was unique. Overall the entire place was so much smaller, calmer, and less confusing than Pearson.

However, where I really noticed the “Porter difference” is when we flew out of Toronto the following morning. (I flew into Toronto in the evening, stayed overnight, and met up with the main group (32 of us!) to fly off to Florida.)

We were whisked through check-in, made our way through security and then off into the Porter lounge. 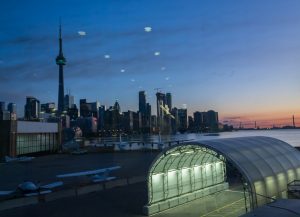 Again, I loved the view from the island. This is the view out of the window, just on the far side of the security checkpoint. Gorgeous, right? I had to stop and snap a pic.

Then on to the lounge, which blew me away. It was large and felt spacious. Seating was in clusters with screens laid out in between for a sense of privacy. There were desk areas, with outlets and chargers for those who like to work or stay connected on the go. The seats were cozy. The window view was pretty cool, but the star attraction was the complimentary beverages and snacks — coffee, tea, latte, cappuccino, juice, pop, shortbread and granola. 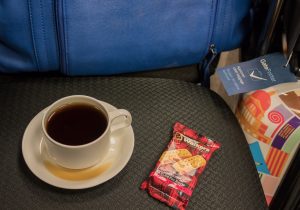 It was early. I was groggy and I was decidedly happy to see that coffee. It was a decent cuppa too. Starbucks brand. Served in proper china cups, not paper.

The whole thing felt posh. You didn’t need to pay the premium to fly first class — all of Porter was a first class experience. 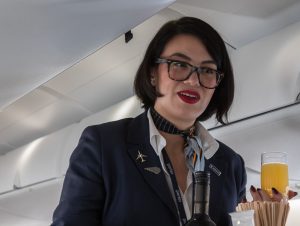 Our drinks were served in real glasses (though I was told that they do break out the plastic when there’s turbulence). Again, complimentary alcoholic beverages were served. I went with the coffee. Mmm. Happy.

The plane had super comfy leather seats, with one important feature, or rather lack thereof — there were no screens on the backs of the seats. No in-flight movies, games or gizmos.

Now, you may think I’m crazy, but I preferred the screen free flight. I actually despise those back of the seat screens, I find them annoying and distracting. There is nothing to stop people sitting around you from streaming things you don’t want to see (or don’t want your kids to see — my 7 year old was terrified by, but also couldn’t stop staring at, the stuff playing on the seats around us during our last family trip).

Which is not to say that I eschew all use of tech. I just prefer to bring my own. At the start of each flight, they announced their Porter policy of “gate to gate” tech use for small handheld devices. I had my camera out for the entire flight to Melbourne and I had so much fun photographing the clouds and the landscape below us. 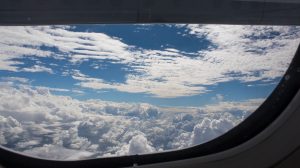 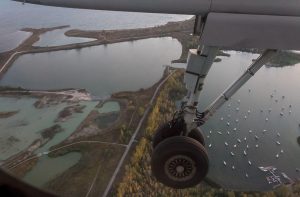 Overall, the entire experience felt a bit like travelling back in time, back to when flying was an EXPERIENCE. So yeah. I think I get it now. The Porter difference.

At the end of my trip, when my husband picked me up from the airport he asked, “How was the flight?” and I stumbled over finding the words to tell him what flying with Porter was like. I ended up going with, “Oh, it was… really nice!”

The truth is I can’t wait to find an excuse to book another flight with Porter. (Though it needs to be somewhere far and away because if I’m just headed to Toronto I will still likely opt for my beloved train ride. LOL)

Disclosure: Porter flew me (and 31 one other media types) out to Melbourne Orlando for an overnight press trip. As always my words and opinions are my own. 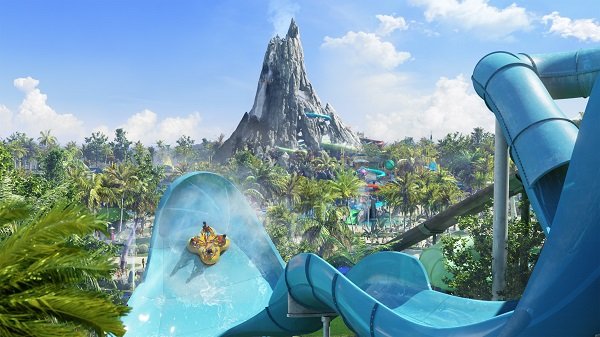 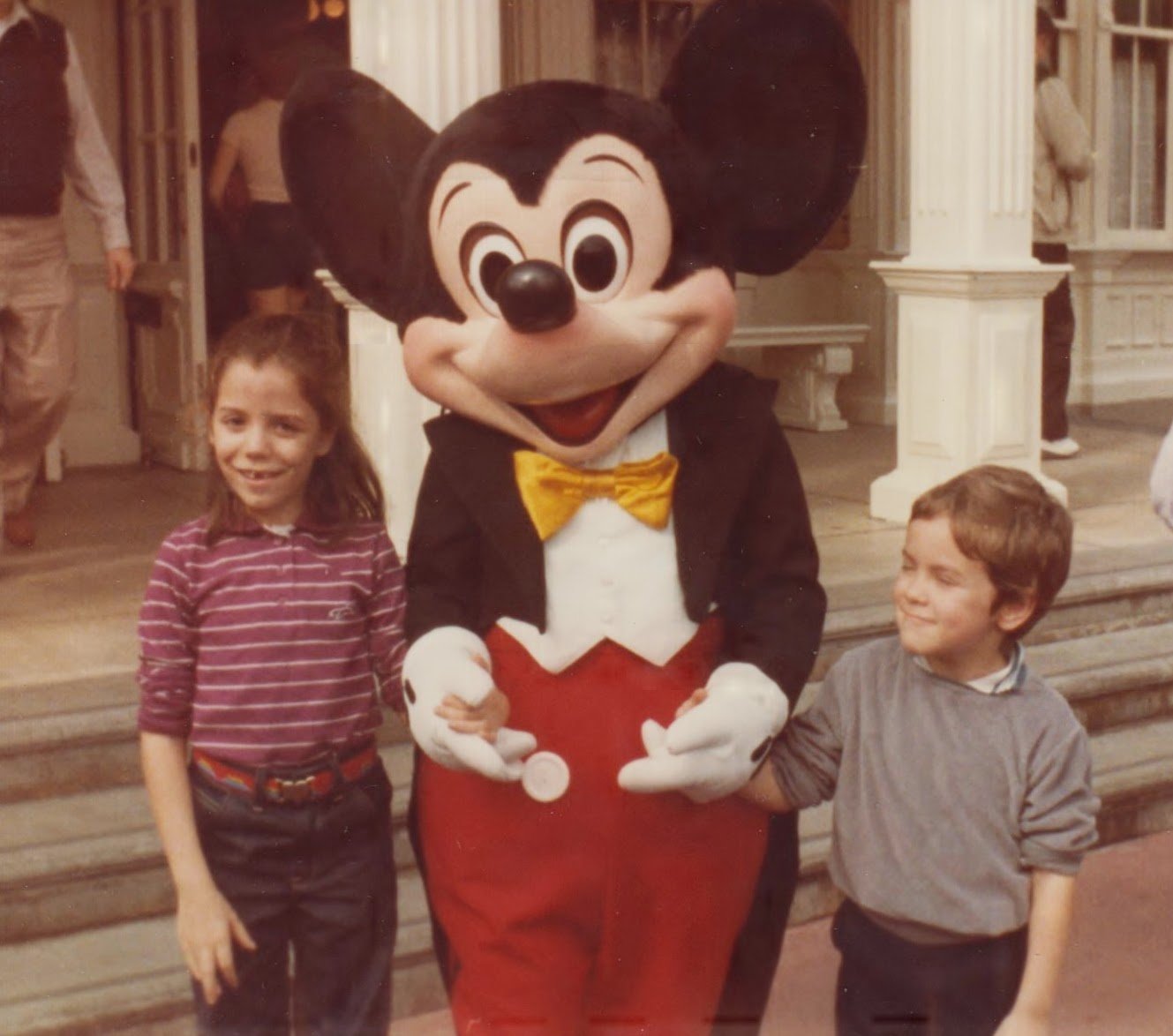 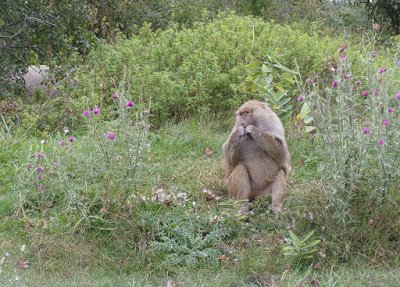