Hubby and I are both attending the Food Bloggers of Canada Conference, and so we both got a delivery of lovely pre-conference swag from Nordic Ware. I was most excited about the Dutch Oven, a little bit of kitchen happiness I’ve long coveted.

I hunted about on the net for a bit looking for dutch oven recipes to test my new beauty out with, and settled on this Jamie Oliver recipe for Chicken in Milk as it’s inaugural run. You can take a look at the original recipe on Jamie Oliver’s site. And then you can read about how I butchered  tinkered with it below.

Preheat oven to 375°. Put half a stick of butter into the dutch oven and heat it up to medium high. Season one side, say the bottom, of the chicken with sea salt. Place the chicken salted side down in the pot and allow it to fry until browned.
Salt the top side of the chicken and flip to allow that side to cook. Repeat, cooking, and flipping to get all four sides, until the entire chicken is browned on the outside.  Turn off the heat. Add a stick of cinnamon, fresh sage leaves, lemon zest, garlic and milk to the pot.

Put the lid on and transfer the pot to the oven. Bake at 375° for 1 hour. Remove lid and continue to bake for another 30 minutes.

Transfer chicken to a plate and debone. Ladle sauce from pot over top of the torn pieces of chicken and serve with crusty bread and potatoes. 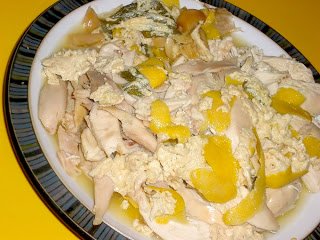 Notes:
I’d estimate time from start to table at a little over 2 hours, that’s including deboning the chicken.
Next time I would fry the chicken for even longer, making sure to get the skin really nice and golden.
I’ll save you from looking it up, the zest is the yellow part of the lemon’s skin. You want to be sure to get just the yellow part, as the white bit just beneath can be bitter. Having zero fancy kitchen gadgets, I used a potato peeler to take the zest off in small strips and this worked fine.
The original recipe called for half a stick of cinnamon. I recommend using a whole stick based on the fact that I attempted to break and then even saw a stick in half with no success.
The lemon zest will have caused the milk to curdle and form little lumps of cheese curds. This sounds nasty but is utterly delicious, trust me.
I sort of worried about popping the garlic cloves in there with the skins on, but they turned out fantastically yummy, and the odd bit of skin that escaped was easy to spot.
The original recipe called for a little bit of olive oil, I opted to use butter instead. Mr.Oliver also wisely suggested removing the browned chicken from the pot, throwing away the oil and proceeding from there. I thought a little butter in a milk based sauce wouldn’t be a big deal, and removing the hot chicken from the put just to pop it right back in sounded like a pain. What I wasn’t considering is how much grease the chicken produces as it cooks. Overall my sauce ended up a little bit greasy, and would likely have been better if I had followed the original directions and dumped off the oil/butter.
Closing thoughts:
This recipe is a keeper that I’ll definitely be making again. I highly recommend giving it a try. It’s a simple low cost recipe and the dutch oven all-in-one-pot aspect makes it a low mess one as well. Plus it’s delicious. The pan sauce was scrumptious, perfect for sopping up with a bit of crusty bread, and the chicken was fall off the bone, moist and flavourful.
I am in love with my new Nordic Ware Dutch Oven. I loved being able to cook it all in one pot and move straight into the oven. I liked that it was enamelled aluminium rather then cast iron, as I appreciated how light weight it was. I also love the non-stock coating and the way it cleaned up like a dream. I loved the way the Dutch Oven heated up while on the stove top and evenly distributed the heat all up the sides of the pot. The fact that the handles also heat up will take a bit of getting used to for me. Of course I would never think of grabbing it without mitts when taking it in or out of the oven, but I just can’t help using the handles when it’s on the stove top (ouch!). 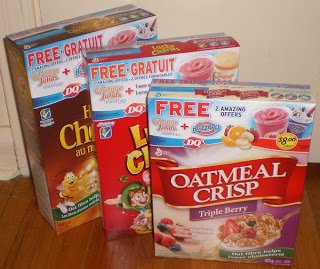 Orange Julius now at DQ, and What Exactly is in there?

Recipe Round Up with Next Issue, Five New Recipes I Can’t Wait to Try