Now, don’t laugh, but it took me years to figure out how to make decent nachos at home.  Every couple of months I’d give it another go and something always went wrong. The chips were burnt around the edges but the cheese was barely melty, the chips were soggy in the middle, or the toppings were so-so. I would throw up my hands, say “I give up, I can’t make nachos!”, and a few days later we would end up eating in at a local pub to satiate the craving. But because it’s one of my husband’s favourite foods, and because it seemed to me like it should be simple enough to make at home, I just kept trying. 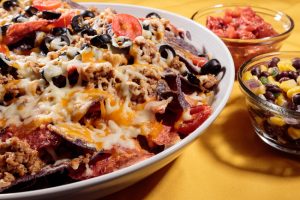 Eventually, through trial and error, I did manage to master the art of making perfect nachos at home. There’s a couple of tricks to it, which I’m going to share with you. The end recipe is simple enough that it’s one my non-cooking hubby is comfy with making. It’s also one of my kids favourite dinners because they get to pick toppings and help in assembling their own mini nacho plates. 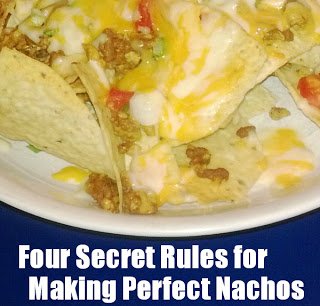 So what are the four rules of nacho making?

Rule #1:
For crisp, non-soggy chips, pre-cook the nachos before adding any toppings.

Rule #2:
Broil on high heat and leave the oven door open a crack. This tricks the broiler into remaining turned on 100% of the time and provides even consistent heat.

Rule #3:
Listen for the sizzle.

Rule #4:
Eat them while they are fresh and hot. They do get soggy if allowed to sit for awhile.

Here’s an example of how we do nachos at my place: 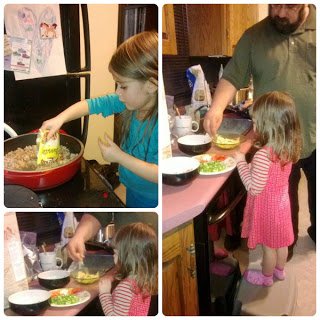 1 pound of ground turkey or chicken
1 packet of taco or burrito seasoning (I like to use Old El Paso Burrito Seasoning. Having played around with several different brands and varieties, this one is our fav for nachos.)

Optional on the side dips:

1. Follow the directions on the seasoning packet to make your meat mixture (You can use ground beef if you prefer, I like to use ground turkey or chicken for a slightly leaner meal).

2. Now here’s the trick to crispy nacho chips — you precook them before adding any toppings. Place your nacho chips on an ovenproof dinner plate, preferably one with slightly raised sides. Place the plate which is evenly covered with just plain nacho chips into your oven and broil on high. Leave the oven door open just a crack. Now use your ears not your eyes to determine when they’re ready to come out. Listen for the sizzle. It’s a quiet sound. Listen carefully. Don’t wander away or get distracted, because it doesn’t take long at all. When you hear the chips sizzling pull the plate out of the oven.

3. Add your toppings. I recommend putting the toppings on in this order: meat, veggies and finally cheese.

4. Place the plate back in the oven. Again, leave the door open just a crack and again listen for the sizzle. However, this time you should also eyeball it, when you remove the plate from the oven the cheese should be melty.

5. Now add a second layer of plain nacho chips. Again place the plate in the oven with the door slightly ajar and broil the chips until you hear the sizzle. Remove plate, add toppings and broil once more. At this point, I usually call it finished, but you can repeat for a third layer if you like.

You can do multiple plates at once, multi-tasking by putting toppings on one plate while another is in the oven. Just be sure to stay focused and listen for that sizzle. It really doesn’t take long for the chips to cook, and a small distraction, say from a pint-sized helper, has lead to scorched chips on more than one occasion. 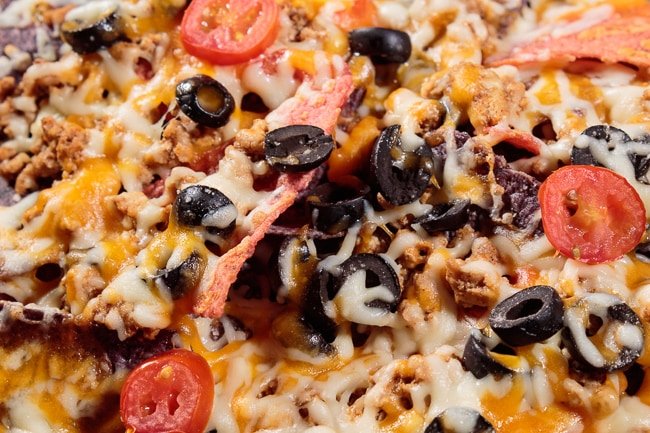 We tend to keep things on the mild side for the sake of the kids, but if you like spicy I recommend replacing part of the meat in this recipe with chorizo sausage (remove the sausage casing and mix the raw chorizo in with the meat mixture while browning), or you could replace the seasoning packet with Old El Paso Hot & Spicy Taco Seasoning mix and of course add jalapenos to the topping list.

You can also replace the meat mixture with chicken breast. Try cooking the chicken with fajita seasoning, onions and sweet peppers. Then use the precooked meat and veggies to top your nachos and add cheese. I find mozzarella goes particularly nicely with the chicken.

Feel free to experiment with different combinations of toppings, and even different types of meat. Or try using refried beans instead for a great meat-free option. Basically, once you know the four secret nacho making rules, you can mix it up any way you like. 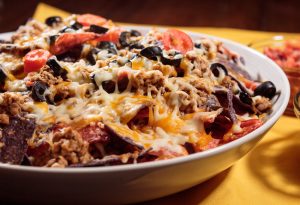 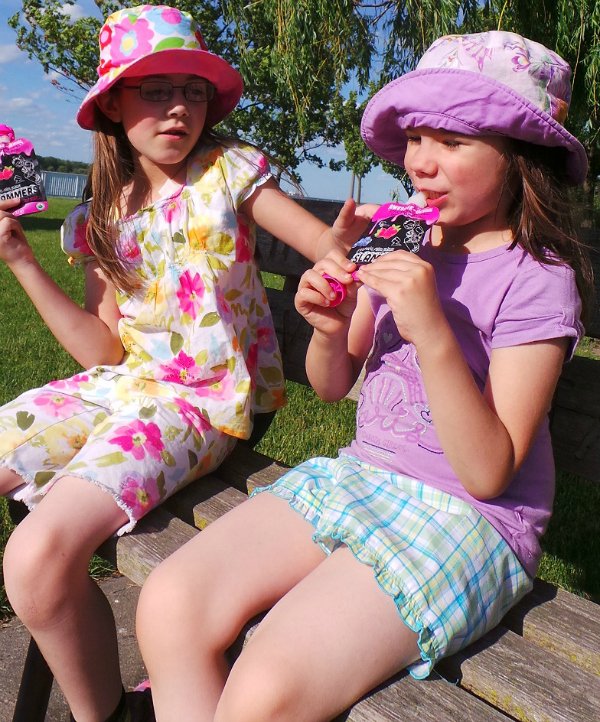 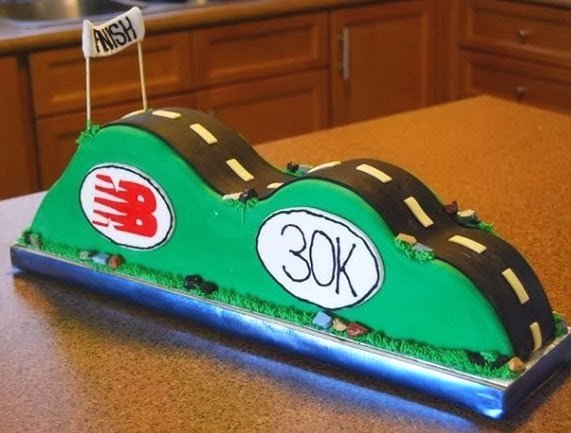