If you’ve been reading my blog for any length of time you may have noticed I am in to plenty of “nerdy” things. Superheroes, Star Wars, comic books, video games, board games. roleplaying, retro toys, Atari, Nintendo, 80s cartoons, anime, sci-fi, fantasy, you name it…. I dig nerd-type stuff. So of course when I first heard of a subscription box for nerds I was intrigued. It’s called Nerd Blocks and they have intriguing taglines like “Mystery Boxes full of themed nerd gear!” and “It’s like Comic Con in a box. Delivered to your door every month”.

The classic Nerd Blocks subscription thing must have done well because over the years they’ve come out with other different themed boxes such as Arcade Block and Horror Block (and starting this month the new Comic Block). It made sense when they also came out with a kids version, Nerd Block Jr. Of course the kids version immediately caught my eye, because I am raising my kids properly, ie with plenty of geeky influence.

However after looking into it I had mixed feelings about the fact that the Nerd Block Jr is available in “boy” and “girl” versions. I’ve got two geeks in training of the female persuasion in this household who love Star Wars and Transformers as much, if not more, than they love My Little Pony. I hate the whole pink toys for girls thing. It makes me grumpy. All of which is to say, part of me wanted to yell “Heck YES, I’d love to review a Nerd Block Jr.“, but the other half was stuck on “Why’d you have to make a pink version? Why?”They don’t make male and female versions of the adult Nerd Blocks, so why do the kids ones needed to be gender coded? It’s the sort of thing that usually gets my back up, and in this case it caused me to overlook Nerd Blocks for a Very Long Time.

So the first few times I had the opportunity to review Nerd Blocks I passed it by. The last time they approached me I took the time to write out my concerns about segregating the kids subscriptions into boy blocks and girl blocks. The rep said she understood, and told me that initially they were going to have a single “neutral” kids block but their audience wanted the blocks divided between boys and girls. “To be honest, it would be much easier to have one neutral block, but we went with what the majority wanted. Most of the items are going to be unisex and will be in both the boy and girl blocks; in fact, this past month, we had many of the items in both the blocks.” She also said that if there was a large enough demand, they’d be “more than happy to add a neutral block, too!”.

After a bit of back and forth it was decided that they’d send me two Nerd Block Jrs, one of the blue boy blocks and one of the purple girl blocks, and I would write up my honest comparison of the two. 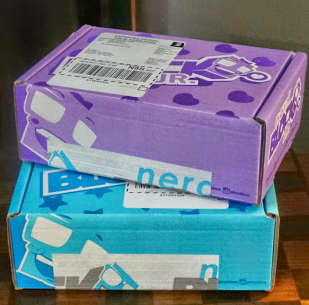 When the two blocks arrived I was excited. There is just something about getting a “mystery” box in the mail that is inherently exciting. I couldn’t wait to tear them open and find out what was inside. Apparently my kids felt much the same because before we even broke into the boxes they were jumping up and down and cheering “Nerd Blocks Rocks!” Which I found baffling since they had no idea what would be inside, not even the general idea from looking online which I had. I asked them why they were so excited, the big kid answered, while jumping up and down, “Because it is Mystery and I love Mystery! Wooo!”

So here’s what the boxes looked like when we first opened them: 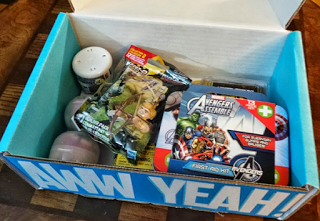 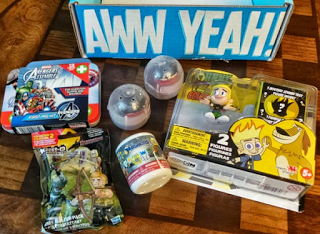 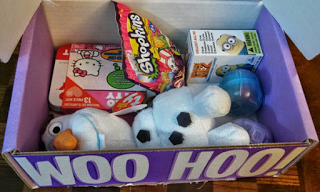 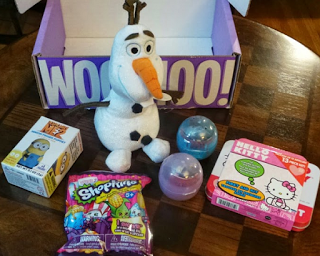 What exactly was in there?

If you’re curious, here’s a list of exactly what was in each Block.

So which block was best?

To be honest I liked the girl block better. The Harry Potter figures were in both sets. The Hello Kitty first aid kit was cute, just as nice as the Avengers themed one. I don’t care for Shopkins, but I get that some kids collect them. All of that along with the Olaf plush toy… it just felt like a good value, a box full of goodies that would actually get played with.

My favourite part of the boy block was the Kreo Dungeons & Dragons figure. The 7 year old was excited to pop it together and marvelled over the articulation. Again the Harry Potter minis were cool, and the Avengers themed first aid kit was cute, useful and well loved by my kids. The girls have no idea who Johnny Test is, so to them it was just a random plastic dude. The 5 year old was crazy excited about the Transformers Mash-Em figure because she loves all things Transformers, but it didn’t last five minutes (it started leaking fluid and I had to toss it).

What did the girls think?

The 5 year old loved the Nerd Blocks. Period. Both of them. Equally. While the 7 year old had a definite opinion as to which was better. Well, watch this video and you’ll see what the big kid had to say about which block she’d order next (I was a bit surprised by her answer).

Overall I was impressed by the quality of the toys that were chosen, and by the value offered. It definitely felt like more than $14 worth of toys. I liked that some items repeated between the two blocks, but that they weren’t exact duplicates. For example there were capsules with Harry Potter miniatures inside them in both boxes, but they were random. And there was a first aid kit in each box, just from a different license. I liked that the boxes felt equal, so if you were giving one of each to two different kids in the same family they would both feel like they got something equivalently cool. If I were to order more I would probably buy two blocks, one for each kid, and get one boy block and one girl block so that we could continue to experience the best of both worlds.

For further info on Nerd Blocks Jr.:
* follow them on Twitter.
* connect with them on Facebook.
* or check out their website (and perhaps order a subscription for some special little nerd in your life). 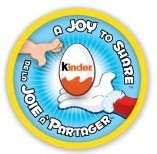 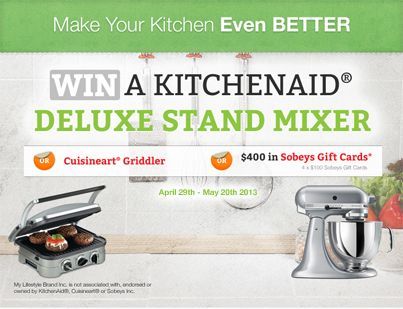