Scrambled States of America and more stories by Laurie Keller is one of the many DVDs in the Scholastic Storybook Treasures series. The theme for this particular DVD is that all of the stories are written and illustrated by Laurie Keller. The DVD contains 4 stories and I really loved about half of them.

In Scrambled States of America the United States, as anthropomorphic characters, hold a party and decide to swap places on the map. The states are animated “coloured pieces of paper with noses” as my daughter called them.  Other than general familiarity with their names and shapes, the story doesn’t give you much pertinent info on the States. Though watching this did prompt an interesting discussion during which I tried to explain to my four year old what a State is. 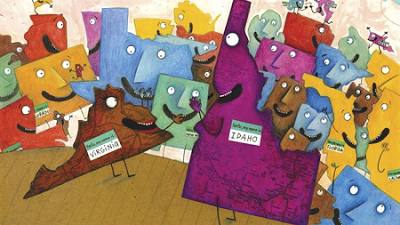 The second story, the Scrambled States of America Talent Show was slightly better in that is contained more useful facts and trivia bits about the various States. I found both of the Scrambled States stories to be too long. They didn’t keep my attention and they certainly didn’t keep my daughter’s. Maybe it’s a Canadian thing? Perhaps if I was from the States I would have been more amused by the whole scrambled states gag?

We both really enjoyed the third story, Do Unto Otters, a manners tale based on the golden rule (“Just doo-dee-doo unto otters as you would have otters doo-dee-doo unto you.”). I loved the different aspects of good manners that the story touched upon; such as playing fair, sharing, politeness, honesty, and being friendly. The story managed to both keep my daughter’s interest and make her giggle.

I loved the final story Open Wide: Tooth School Inside, which managed to fit in tons of in-depth info on teeth. I really enjoyed this one, however it did seem to be a bit over my 4 year old’s head. My daughter hasn’t started Junior Kindergarten yet and has no experience with school, so the parody of permanent teeth being in school was sort of lost on her.  The story went into a great level of detail concerning both primary and permanent teeth, and explained concepts such as the crown, enamel, dentin, pulp, gums, ligament, bone, cementum, root, bacteria, and germs.  It also included one of the best explanations I’ve ever seen as to exactly how bacteria/plaque causes cavities.

The special features included a set of interviews with the author/illustrator, Laurie Keller, and a Tooth School music video.  I always love when they include interviews with the author! The first of the two interviews was a little dry, and didn’t keep my daughter’s attention, but I still enjoyed it. The second interview seemed more geared towards children.
Overall, compared to the stories on the First Collection which I reviewed previously, the stories are longer and more involved. The suggested age range on this DVD is 4-10 years old, which to me seemed a little off.  The stories did not keep the interest of my just turned four year old girl, and seemed a bit above her level of understanding.  While this was not my personal favourite of the Scholastic Storybook Treasures series I do think older kids would enjoy this DVD. The voice acting, music, sound effects, and animation were all fantastic. Just the subject matter didn’t work as well for me

You can purchase Scrambled States of America and more stories by Laurie Keller direct from Scholastic via their NewKideo site.  (Purchase via the NewKideo site is US only. In Canada the DVD is available on Amazon.ca as well as Chapters.) 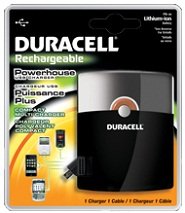 The Great Mystery Boxes Event ~ May 14th to May 24th! {Giveaway} 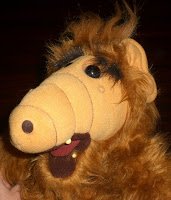