We have been testing driving Netflix for almost two months now, and I have to tell you guys I am in love with this service.

Quite simply, if you have kids Netflix rocks!

We don’t have cable or satellite TV.  In the past my children’s television viewing has been limited to what we have on DVD.  I have always liked that they only watch DVDs because it is commercial free and it also means I have some say in what they are watching.  Now, in comes Netflix and I’m able to  get the same instant on demand commercial free experience as a DVD. No more cluttering up my shelves with dozens (and dozens!) of kids DVDs. The selection of Children’s TV shows is fantastic.  The line up includes many of our favourites, Zoboomafoo, Blue’s Clues, Kipper, Sesame Street, Paddington Bear, Wonder Pets, and so many others! There are also many fantastic documentaries available that we have been enjoying sharing with the kids such as BBC’s Walking with Dinosaurs series, Big Cat Diaries, and Wild China. That doesn’t cover a tenth of whats available. The selection really is incredible, and there is always something my girls are excited to sit down and watch. 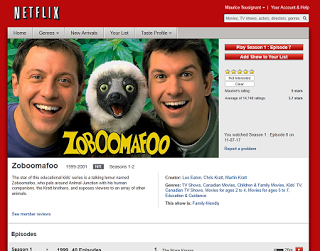 Zaboomofoo for example is one of my all time favourite kid’s TV shows. My husband I actually used to  watch it back in our pre-kid days. I think it is a fantastic show. G-Girl loves it, and has been a big fan since she was around two or so. I have managed to hunt down several of the now out of print DVDs so I could share it with my daughters. I had a hell of a time finding out of print DVDs of Zoboomafoo and spent good money purchasing them online and having them shipped to us.  Now, here on Netflix I have every single episode of Zoboomafoo that was ever aired.  Netflix remembers which ones we’ve already watched, and it remembers where we left off in the season.  We can just hit “watch next episode” and enjoy each one in original air-date order, or we can browse through all 65 episodes and chose which one to watch.

So how about for the grown ups?

You are not going to see first run, it was just released last week, movies on Netflix. For me this is not a problem. My husband and I have been enjoying watching episodes of Myth Busters, the old classic Battlestar Galactica TV series, and movies like American X and Predators.  I was super happy to find the sort of shows that you usually see on the History Channel, offerings like “Egypt’s Golden Empire” and “Cracking the Maya Code”. I have been watching and loving Terry Jones: Medieval Lives. The Japanimation selection also rocks my socks. (Yes, I am a geek. Thanks for asking.)

Let me tell you about browsing Netflix… 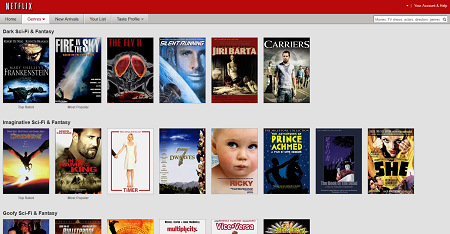 You spend a bit of time rating movies (any movie not necessarily just ones you’ve seen on Netflix), and from this they will create suggestions for you. The more you rate, the better the suggestions will be. It comes up with some interesting cross-genre categories on the recommendations page, for example mine currently has headers like  “Family Friendly British TV shows”, “Cult Comedies from the 1980s”,”Witty Romantic Period Pieces” and “Visually Striking Foreign Dramas”.

The browsing system seems a bit odd to me, in that it doesn’t show everything that is available. Things will come up if you search for them by name, that won’t necessarily show up while browsing.  I also find that I get a different browsing selection on different systems, for example on our xBox vs the desktop computer.

However, I love browsing through Netflix. Every time I look I find something else that I just can’t wait to watch. You can create lists, basically bookmarking movies that you want to go back and watch, and currently my “to watch” list is way longer then my TV time. I am not going to run out of things I want to see on Netflix any time soon. Plus, they are constantly updating and adding new content.  That said, some of the content is only available for a limited time.  When you look at the info for a movie or a show, sometimes there is a line near the bottom where it says “available until date”, which means after that date it will be gone.

What’s this about multiple systems?

You can use one Netflix account on up to five different systems. We have it set up to work on our iPad Touch, our desktop computer and our xBox 360. It also works on the Wii and the Playstation 3.  You can use it on more then one system simultaneously, but it does bog down your internet connection.  I like to use the iPad as sort of a super controller for browsing through the Netflix app, and then once I find something that I want to watch get it set up on the TV  via the xBox.

We attempted to set Netflix up on the Playstation 3 but were unable to get it to work. The help pages that the Playstation links to aren’t up to date, which was a bit frustrating. There was a 1-800 number to call for help, which I haven’t tried yet. It is also possible the reason it won’t work is something to do with our crummy internet connection.

We have DSL internet.  When watching Netflix the video quality is good, and the instantaneous on demand streaming works well. Where we ran into problems is — we’ve been having trouble with our internet connection disconnecting and each time it does this we have to reset the router for the xBox downstairs to pick up our wireless connection and continue streaming.  Running up and down the stairs over a dozen times during one movie sucks.

Of course this isn’t really a problem with Netflix, but with my internet connection. We’ve had issues with the phone line and internet disconnects since we first moved into this house over five years ago. I have made do with lousy internet access for years (it will work fine for months at a time, and then go haywire again). We are really enjoying Netflix. We are enjoying it so darn much that we are discussing finally paying to get someone to come in and repair the phone lines.

For us Netflix is perfect. I was impressed with the selection, which is constantly updating.  You do need to keep an eye on the “expiry” date of shows to avoid some disappointment. We will most definitely be keeping Netflix once our free subscription expires.

Since you can sign up and get a month free to try it out, and then drop it without penalty, I really think everyone should give it a shot. I am betting you will probably fall in love, and completely agree that it is well-worth the low price of $7.99 a month.

There has been a ton of fuss online lately about the fact that Netflix has raised their rates.  I have seen Canadian friends in my Facebook feed ranting against Netflix and their rate increases. Some folks seem to have become confused, so I want to mention that the price increase is only in the States. Their has been no announced rate increase for Canada. It is still only $7.99 a month.

Overall I am in LOVE with Netflix. I can’t recommend it highly enough. I think for $7.99 a month it is a steal. If you have kids, this is a no-brainier, sign up now. Also, as I mentioned before if you sign up for Netflix through Swagbucks you can earn 900 Swagbucks which equates to $10 in Amazon gift cards.

Disclosure: I received a free six-month subscription to Netflix. My opinions are my own and were not influenced by the company, or by the free product received.