You are here: Home / Blogging How-To / On Winning The Golden Ticket and Pursuing My Bliss

I wrote a bit yesterday about how in 2011 I took a leap of faith and bought a ticket to Blissdom Canada. Well the following year I again took that leap and bought a ticket to Blissdom Canada 2012, not really sure how it was going to fit into my plans. I had signed on as an Ambassador for the ShesConnected Conference which was set to take place on overlapping dates. Yet I bought a ticket for Bliss, thinking I would somehow do both. Once again I found myself thinking I will probably sell this ticket, yet somehow I didn’t. I held on to it.

As the dates rolled closer I started to realize just how foolish I was to think I could do two conferences at once. But then Blissdom Canada made some exciting announcements about additional excursions. I read the blurb for the Canadian Family magazine event and I wanted with all of my heart to attend. I thought to myself, if I get this excursion I will go, and if not I will try and sell my ticket.

The big day came, the day when sign-ups for the excursions become available online. I gave my kids a brand new colouring book and a fresh box of Kleenex to fight over. (Yes, seriously. Don’t judge.) The tickets were supposed to be released at Noon. I sat on the computer hitting refresh and waiting for them to show up. I started at 11:50, worrying they were going to be released early, or that my clock was off. While my kids were strewing bits of Kleenex all over the front room I sat and hit refresh every thirty seconds for over ten minutes. And that’s how I got the golden ticket.

October arrived, I was off to Toronto, trying to somehow squeeze in not one but two blogging conferences.

Once I was there, everyone I spoke to wished THEY were going on the magazine writing excursion. The jealousy was palatable. I heard all sorts of conspiracy theories on how folks were chosen based on favours or whatnaught. I almost felt guilty admitting that I was one of the lucky few. I felt like I had indeed won the golden ticket. A trip inside Mr. Wonka’s Factory, a chance to see how all that sweet candy is made. 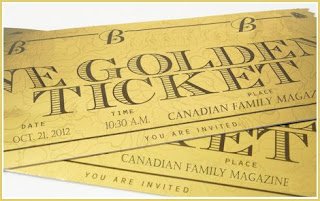 You see once upon a time I was a journalism student. Fresh out of highschool I took journalism at the local college and I lapped it up, I loved it. That is until we hit the end of the first year, which is when they started emphasising how out-going a journalist needs to be. How we needed to be able to chase down our own stories, knock on people’s doors, get in their faces. I just couldn’t do it. At 19 year old I was so painfully shy that I was physically incapable of doing what they were asking. Despite my honour roll grades, I didn’t return for the second year of the program.

So there was this little voice in the back of my head, my 19 year old self, squealing with glee at the idea of meeting the editor of a national magazine and taking a tour of their offices. Let alone sitting down and working on a group story. It is the sort of thing I literally dreamt about for years, and now here I was, golden ticket in hand off to visit the chocolate factory.

When the big moment came, I was a nervous breakdown on legs. In the days leading up to the Canadian Family visit I had been completed wrapped up in both attending and putting on a conference. I hadn’t slept in days. I was living off of coffee and adrenaline and was exhausted almost to a breaking point. We had a little added drama as I managed to get lost trying to find the office. And then ended up sitting outside the building, unable to find the right entrance or figure out how to get in. Yeah, as if I wasn’t nervous enough already.

We finally entered the building and made our introductions, I was shaking with excitement. I felt awe-struck at meeting editor-in-chief Jennifer Reynolds, who had very graciously given up a Sunday afternoon to show us around her candy factory offices. We weren’t allowed to take any photos as we had our brief tour. I stared around trying desperately to store it all in my head. I was walking around in this 37 year old body, while my 19 year old self was somewhere in the back of my head doing an Oompa Loompa like song and dance routine.

Finally we sat down and got down to the business of trying to develop a group story. I was very intimidated by the fact that I felt like small potatoes compared to the other folk in the room, many of whom already had some fantastic publishing credits under their belt. I shook. I talked, probably too much. Here I was living out a dream, doing something I never thought I’d have the guts to do. Amazing. Amazing how I’ve changed in 18 years, arriving at a place where I could be doing this. Amazing that I even managed to snag the golden ticket.

I went home with all the various bits and pieces of this awesome experience floating around in my head. I took what we had discussed at the table that day and I turned it into a pitch. And then I developed that pitch into a piece of writing. Submitted it and held my breath.

In the interim Jennifer Reynolds left to work at Canadian Living and Robin Stevenson took up the role of acting editor-in-chief at Canadian Family. I am extremely thankful for the fact that she decided to move ahead with the story our group had begun developing with Jennifer on that day in October. 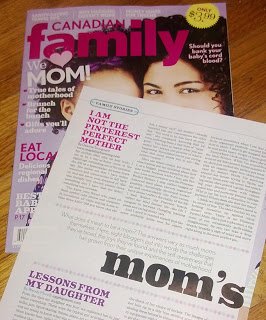 End result? This arrived in my mail box last Wednesday. And I’m not going to lie; I squealed a bit, I called my mom, I showed it to my kids (who can’t even read yet) and I danced around my living room with joy.

Am I going to pursue further magazine writing? Honestly, I don’t know. But I’m eternally grateful to Blissdom Canada for having given me this daydream like chance to pursue my bliss. I won the golden ticket, my 19 year old self took a tour of the chocolate factory, I will never forget that.

EDIT:
Here’s a link to where you can find my article, alongside the work of several of the other bloggers who took part in this fantastic day: Mom’s the Word: Personal Experiences of Motherhood, as published in Canadian Family.

I’m not really here, in more ways than one. 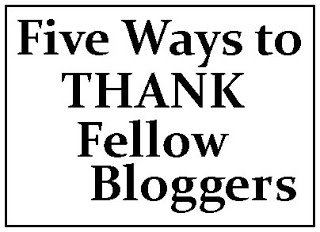 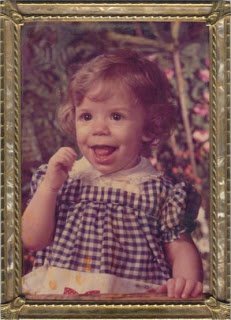 I got here a little late…