You are here: Home / Mom Life / Always Infinity Pads, Behind the Scenes at the Belleville Ontario Factory

Back in June I was part of a small group of P&G Mom’s who had the chance to visit the Belleville Ontario plant, which is the only place in the world that produces the Always Infinity pads.

First we got to sit through a little presentation about Always. It’s a brand that is all about innovation. Since they launched back in 1984 Always has introduced several industry changing product innovations. In 1986 they introduced pads with “wings”, then in the 1990s they brought out the much more discreet and much more comfortable Ultra pad (which was seven times thinner!), and in 2008 they launched Always Infinity. As I watched the presentation I considered my own experiences with Always over the years and thought: 1)I couldn’t imagine life without wings and 2)holy crow those old pads were bulky.

The Always Infinity pad is made of a revolutionary new material that holds up to 10x it’s weight in liquid. The pad is a type of soft porous plastic, divided into two layers. The top layer has larger air bubbles, and is meant to draw the liquid down into the slightly denser core, like rocks over sand.  Called Infinicel, this amazing material was researched, designed and made here in Canada at the Belleville plant.

I’ve been using the new Always Infinity pads for a while now, and appreciate how thin, comfy and flexible they are. But I hadn’t really given much thought to WHY they perform better. So cutting one open and comparing it to a regular Always pad to see what makes it different was a pretty interesting exercise.

We also chatted a bit about our “first period experiences”, and got to see some stats on how “The Talk” has changed over the years. I was a bit shocked by some of the stats, enough so that I wrote a separate post on it.

Our tour of the plant…

The group got to walk out on the plant floor and check out how the Infinical material is made. This is the part of the tour I had really been looking forward to, and I wasn’t disappointed. Watching how they make the special Infinicel material was pretty interesting stuff.

From start to finish it takes about 20 minutes to make a roll of Infinicel core. First, they shake and mix salt water, water and oil to basically make a plastic “foam”.  The top more porous layer has larger air bubbles, while the slightly denser core is made up of smaller bubbles. They mix the “foam” at different speeds to make larger and smaller bubbles for the two layers. Then it’s cooked for 12 minutes in a giant steam oven, over 100 metres long.

Next the material is dried in a machine that looks a bit like a wringer washer machine, which wrings out much of the water. And then it enters the drier, which is a bit like a second oven, one that blows 350° hot air over the material. Finally it comes out at the end and is rolled onto giant rolls, cut to the right size for the assembly line to create pads from. 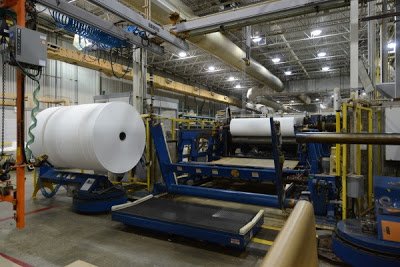 That roll of material, the Infinicel core, is produced only here. Other parts are brought in to the plant and the assembly line, a mass of conveyor belts, heat guns and crimping machines, transform it all into the finished box of Always Infinity.

The assembly line was a fascinating Rube Goldberg like contraption, much of which was encased in glass. No human hands touch the product as it’s being assembled. There were surprisingly few people working the line. I didn’t actually count, but I had expected more live bodies and was surprised how few people it took to run the assembly line. Of course I later discovered there were more people out of sight in a separate room manning computers that watched for quality control. Our guides pointed out the small lights shining on to the assembly line, and with each light a camera. I was also a bit surprised by the speed. The pads were zipping past in a blur, literally moving faster than my eyes could track.

Always, by the numbers…

The Belleville plant is situated on 159 acres, of which only 15 acres are “under the roof”. I thought it was neat that much of the excess acreage is used to grow hay, which local farmers harvest. Each day twenty trucks of raw material come in, and twenty-eight trucks of product ship out for use worldwide. We didn’t get a chance to peek into the labs but the R&D for the Always line also takes place here, and their innovative ideas are exported to 9 different countries. 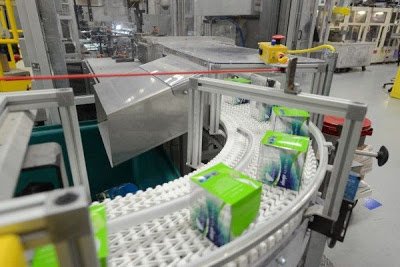 I asked about how the end product breaks down in landfills and was told I was asking the wrong question, as landfills are designed to hold garbage not to help it break down. The correct questions: Is it made of, or does it break down into, anything toxic? No. Does it leach anything into the soil? No. How much space does it take up? Very little.

Amazingly the factory produces less then 1% waste. I believe the one slide they showed us actually said less then 0.05%, which is pretty darn impressive. I asked about the waste water from the wringer machines and was told it was collected and reused. While any Infinicel scrap is collected and sold to another Canadian company who grinds the core material down and stuffs it into giant “socks”, which are used to clean up oil spills. Pretty neat, eh?

Overall it was interesting to have a chance to go behind the scenes and see how a product I use regularly is manufactured. Thanks P&G! 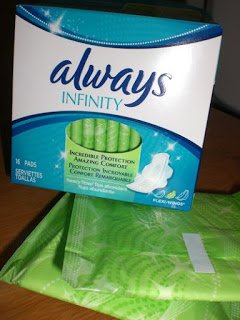 One lucky Maple Leaf Mommy reader is going to win

an Always Prize Pack valued at $50,
which includes 4 boxes of Always Infinity
and 4 boxes of Tampax Pearl Tampons.
This giveaway is open only to Canadian residents.
Please be patient, the entry form may take a moment to load. Need help?
Check out this 50 second tutorial on how to enter my giveaways via Rafflecopter.

Mama Needs a Time Out, Or What I Really Want For Mother’s Day Is… 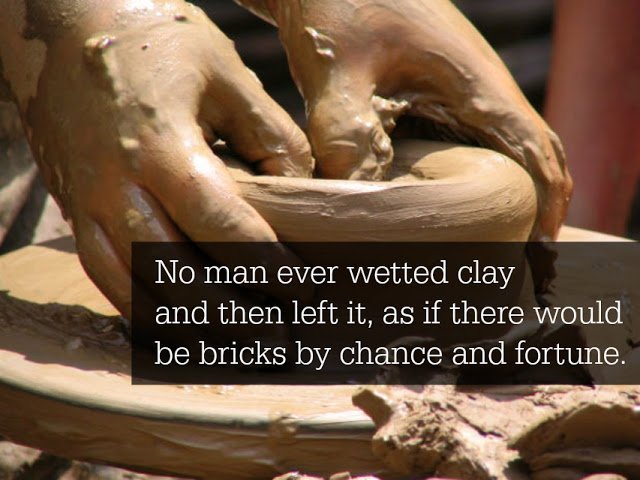 On Hard Work and Luck… 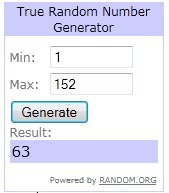