You are here: Home / Mom Life / Motherhood Confessions / Here’s what I DON’T want you to give my kids for Halloween…

Ok people, friendly Halloween-candy-handing-out people, I want to ask you a favour. Could you please stop giving my kids so much candy? Like seriously, one piece is enough. This whole, “Oh my goodness. Look at you! You’re so cute. Here let me drop two big handfuls of junk food into your pillowcase.”, stuff has to stop. 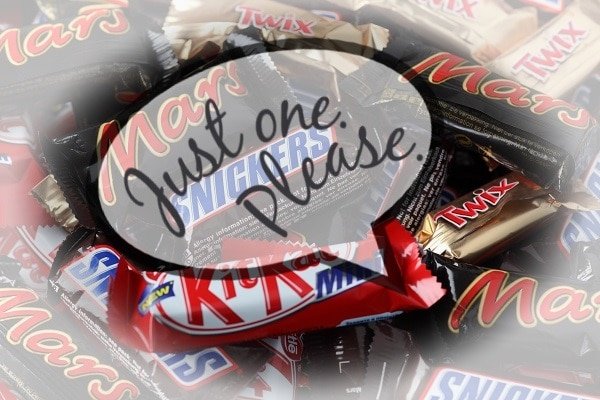 Yeah, I just threw out handfuls of Halloween candy. I felt a bit guilty about the waste, but it was the dregs left from last year’s haul, stale as stale can be (Swedish Fish shouldn’t crunch, just saying).

Listen guys, this is what you need to understand. It’s not about the candy. For my kids at least, it’s much more about the EXPERIENCE. And my own memories of Halloween say the same thing. It’s the process. The chance to dress up as whatever you like, and go door to door throughout the neighbourhood showing off your costume while friendly smiling adult faces assure you again and again just how cool or cute you look. 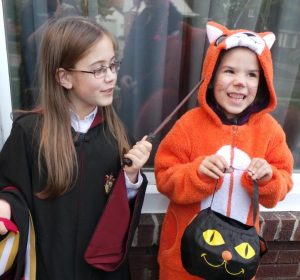 The candy is like a points system. Look at this huge bag of stuff we brought home. I went to SO MANY HOUSES! We did three streets this year! It was so much spooky fun!

And much like the point system that it truly is, some folks want to hand out bonus points for polite little kids in elaborate costumes. Please, don’t do it. Keep it to one candy per kid. I beg you.

The truth is, my girls are never going to say no to fistfuls of chocolate bars. What kid would? But they would be just as happy with one each. They would be happier, actually, if the bag stayed empty longer, and we got to explore further. They love marching down the street from door to door, checking out all the decorated houses and costumes on the other kids that we happen by.

Oh, and while we’re on the topic, there’s one other thing I’d love for you to keep to yourself — cans of pop. Mainly because they are too darn heavy, and adding just two cans to our pillowcase changes it from “bag of Halloween loot” to potential murder weapon. Also, there was that one time when one of the cans popped open…. so not cool.

And if you absoltuely HAVE to hand out cans of pop, can they please not be cold from the fridge? Because, as I’ve unfortunately discovered, condensation from the ice cold cans makes the other candy soggy, and then we have to toss it when we get home.  (Which, actually, is no big loss. Since there is inevitably far too much candy anyway.)

When I was a kid, I wasn’t allowed to eat most of the candy that folks handed out. My brother and I both had a dairy allergy. This was thirty years ago, long before anyone had dreamt up Teal Pumpkins. We would go trick or treating with one of our parents (they took turns, alternating years). We would go door to door with our pillow cases, collecting treats. Whenever our bags started to fill up we would drop the loot into the garbage bag my mom or dad was carrying and continue on. 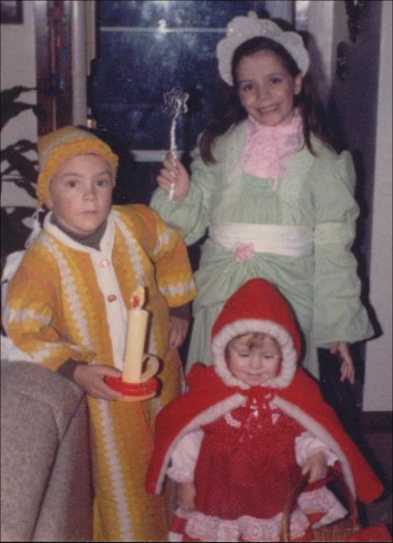 At the end of the night, we would dump that bag out onto the dining room table and gloat over how many houses we had visited. (The years when my dad chaperoned us were always particularly impressive, he didn’t mind hauling a heavy bag and was always good for an extra street or two). We would each pick out one thing to eat, whatever the heck we wanted. Forget about the allergies for one sweet minute and have a wee chocolate bar or a peanut butter cup. And then the candy would get sorted, anything with dairy in it got whisked away into the freezer for my parents to eat (and I think my dad used to bring some of it into work to share with the guys), while chips and sugary rockets would go into a box in the top of the hall closet, where we’d dip into it for occasional snacks. I never cared that my parents took most of the loot away. That box of candy would still last us until Easter.

It was never about the candy. Halloween was my favourite holiday. I loved going door to door, walking the neighbourhood with my family, pushing to see how late we could stay out, how far we could go. I loved that moment when we dumped it all out on the table because that glimmering pile of junk food felt like victory. We just conquered the neighbourhood, and here are our spoils. Point system, right?

My own kids, who luckily don’t have any allergies, still give over about half of their candy. Forget the Switch Witch. It’s just straight up, “Guys, this is way too much candy for two little girls. I’m going to take some of it to share with the gaming friends.” (which is what my kids call the group of grown-ups who come over once a week to play board games at our place).

When they get home from trick or treating my kids dump out their loot into mounds on the dining room table. I carefully sort through, examine each piece and toss anything that is soggy, half-open or otherwise suspicious looking. My kids look on, excited, eagerly hooting as I sort through each bit. I see their eyes shining as they stare at that pile. I know what it looks like. Victory.

I let them each eat a candy, or two, or three, and then it’s teeth-brushing and off to bed. I get down the giant wicker basket from on top of the china cupboard and once they’re safely snuggled away I load up their “candy basket” with an assortment of goodies. I try and make sure there is at least two of each type of chocolate bar. I keep all the rockets for the one kid, and the M&Ms for the other.

I grab the big wooden bowl that I like putting out on the table downstairs and I fill it to overflowing with candy to share on our next board game night. And then I dump whatever’s left into a grocery bag and set it aside to give to my mom or drop in the donations at the grocery store.

In the end, my kids don’t keep even half of the candy that they’ve collected and it still lasts them a year. Come twelve months later, I’m sitting here tossing out stale caramels and Skor bars.

It’s about seeing just how much loot we can haul home, but it’s not really about the candy.

So please, just one piece. 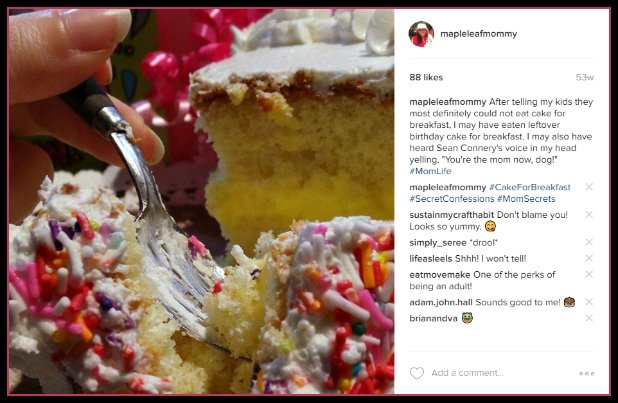 Can I cheat and not raise a cheater?
Nurse in Public, Pump in Private?