You are here: Home / Mom Life / Just My Life / My Early Childhood Memories… Growing up in the 70s

I have a fair amount of early childhood memories, from when I was 2 and 3 years old and on. I look at my three year old daughter now and wonder what, if anything, she’ll remember from her life right now. 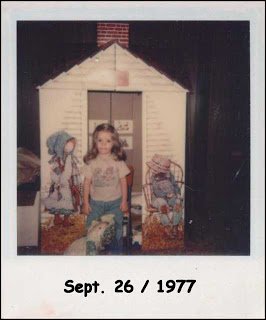 Up until I was five, we lived in a mobile home in Essex, a small town about a half hour drive outside of Windsor, Ontario. My husband often teases me that I grew up in a trailer park. It was a little more permanent then that. My dad had built an addition onto the back, and there was a lovely wooden deck for a front porch.  The reception area, when you first came in the front door, was my play room. I had this Holly Hobbie cardboard house that I loved, which took up most of the space and was usually jammed full of stuffed animals, such that I couldn’t actually get inside it. There was a small lip along the inside edge of this playhouse where I used to line up my Red Rose Tea figurine collection.

One of my most vivid memories is of the day I got the scar which I still have on my face. I was three years old. My mother was pregnant with my brother and she was working on getting the nursery ready. She had lifted me into the crib, and I was sitting in there playing with some stuffed dolls. She left the room when the phone rang. The closet door was open and I could see these trays full of golf balls in the closet, piled with some shiny metal serving trays. I wanted those golf balls! I climbed up on top of the stuffed animals and strained to reach them. I managed to knock the pile out of the closet, just as I fell out of the crib. When I landed the corner of a metal serving tray cut my face, a deep cut along my cheek bone. I was terribly lucky that it missed my eye. I remember it really hurt and I couldn’t stop crying. My mom just kept holding me on her lap and rocking me in this big fire engine red bentwood rocker we had. I remember the hospital had a special children’s room with a mural painted on the ceiling and that I got to hold my mom’s hand as they stitched me up.

My other most vivid memory from this time is the day I got my cat, Tina. We went to a family reunion held at my Mom’s Uncle Paul’s farm. There were three legged races and potatoes sack races. We got to see horses in the barn. Supposedly I “won” a cat in a potato sack race. I remember climbing under this big wooden front porch and picking out my kitten. She was mostly black with some white on her paws. The entire car ride home my parents debated if we were really going to keep her. We walked in the front door, I saw a can of tuna sitting on the dining room table and I told my mom that I wanted to name the cat Tuna Fish. She wouldn’t go for it. I then promptly came up with Tina Leena Too. I don’t have a clue where the Tina Leena part hopped into my head from, but I do know that in my mind the Too always meant “Also Tuna Fish”.

One of my favourite stories my mom tells from this time is of my imaginary friend “The Big Black Man With The Mustache”. When my mom caught me “baking” a birthday cake for her, by mixing flour and sugar in a pile on the floor it was The Big Black Man With The Mustache’s idea. When I opened the front door and let in not just our cat, but also a strange stray, The Big Black Man With the Mustache did it. My parents had no idea where this fellow stemmed from, and when I was older my dad used to make off-colour jokes about how he used to think my imaginary friend was actually a reference to my mom’s (non-existent)secret boyfriend. In actuality, I remember that he came from the image of Hercule Poirot on the covers of my mom’s Agatha Christie books.

I remember that when there was company, the grown-ups would be sitting at the dining room table, and I would stand at my mom’s elbow waiting for her to pay attention to me. She would draw me these abstract doodles and I would take them away and colour them. Then I would return with the finished picture and stand at her elbow, waiting for her to acknowledge me and for her to make me another picture to colour.

She also used to take the paper grocery sacks and turn them into full body masks. She would cut a bit up the sides for my arms, and cut out eye and nose holes. She would draw characters from TV, like Miss Piggy, or from my story books. I loved those puppet/masks. I had a pile of them. I remember being really disappointed when we moved and the new grocery store offered plastic bags.

The summer of my fifth year we moved into a three bedroom house in Windsor. For me our move was characterized by minor inconveniences. It happened to coincide with my favourite cartoon, G-Force, being taken off the air. I remember thinking it was because we moved that our TV would no longer pick it up. I was also sad because the cardboard playhouse that I loved didn’t survive. Once taken apart, my parents couldn’t get it to go back together again.

That fall I started kindergarten at the nearby school, which I would attend for the next nine years.

This was around 1977-1980. My favourite TV shows were Mickey Mouse Club, The Muppet Show and G-Force.

This post is the second in a series to record my youth as a gift to my children.

Our Long Weekend…
We’ll see where this goes…