You are here: Home / Mom Life / Tips, Tricks & Hacks / The ONE magic ingredient you need to make a Scarecrow Costume in 10 minutes or Less 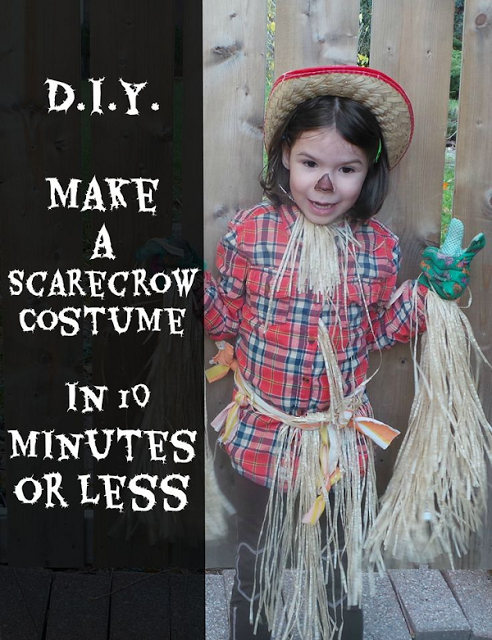 For Halloween, my Oz loving girls asked if they could be the Scarecrow and the Tin Woodsman. The seven year old had a clear vision of her Tin Woodman costume and some pretty elaborate ideas involving cardboard boxes and tinfoil. I was left wondering how I was going to turn her younger sister into the scarecrow. I had some ideas involving making straw out of yellow felt, or…. something…..

Grandma to the rescue! I was brainstorming on the phone with my mom, and next thing you know she decided to run out to the thrift store just to take a peek. She came back with a cowboy hat, a hula skirt, a pre-sewn Tin Woodman costume, and a Dorothy dress. What luck! I couldn’t believe she just happened to find two Oz character costumes at the thrift store! 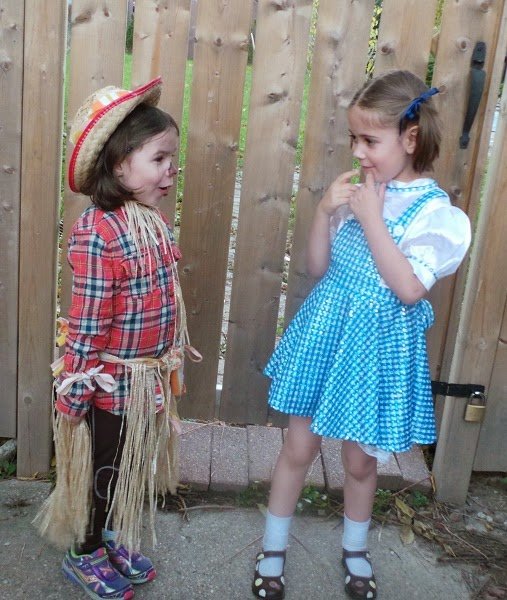 The big kid decided to go dressed as Dorothy for her Beaver Scouts Halloween party. This dress would have been a bit chilly for trick or treating but was perfect for an indoor party. The kids are pretty excited to have it in the play clothes bin now too. Like I said, super lucky find! 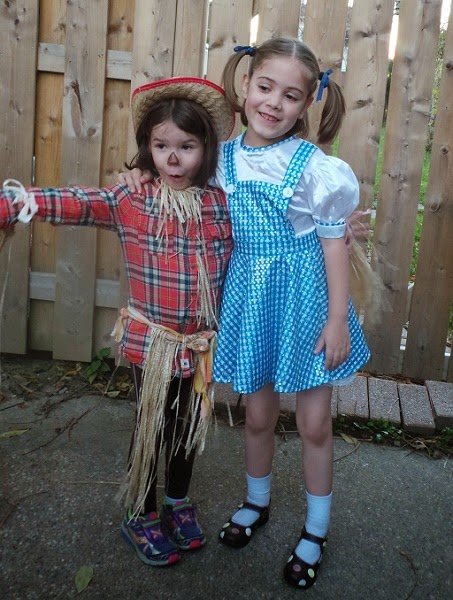 Tomorrow night, for Halloween trick or treating the big kid will be going out as the Tin Woodsman. I still need to make her hat (there’s a plan involving a headband, a funnel and some tinfoil), and sew a red heart onto her Tin Man costume (my girl is quite insistent that she is disguising herself as the heart having Tin Man from the later books). 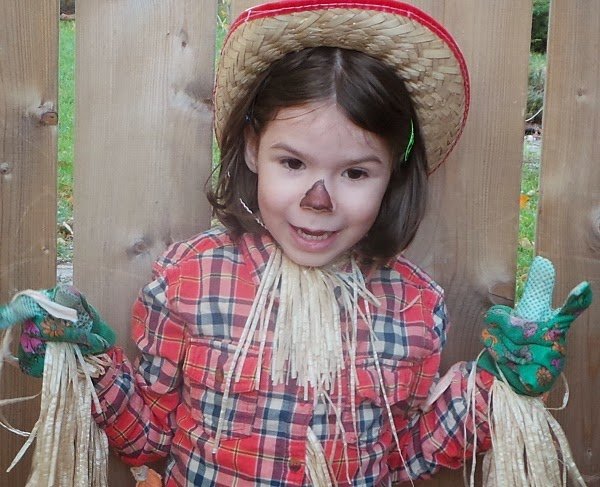 The little one’s costume already got a trial run when she dressed up to go to her big sister’s Beaver Scout Halloween party. I am pretty proud of this scarecrow costume which we put together in under 10 minutes.

We borrowed big sister’s plaid blouse. It’s a bit big on the four year old, which makes it perfect for wearing an extra layer or two underneath come trick or treat time. I cut two pieces from the hula skirt waistband, measured to about the size of my daughter’s wrist. We put the plaid shirt on and pulled the sleeves up high, then I placed one of the hula skirt pieces around her upper arm and sort of held it there as I pulled the sleeve down and buttoned it closed. I pulled bits of “straw” out through the buttonhole area, and all around her hand at the end of the sleeve. Rinse and repeat on the other arm. I measured and cut a piece of hula skirt waistband so that it was about the size of my daughter’s neck. I placed it loosely around her neck, and sort of tucked down inside the shirt, and then pushed bits of it out through the first two buttonholes.

I had a torn-up pillowcase and I used it to make a cloth band to tie around the cowboy hat (mainly to hide the plastic sheriff’s star on the brim). I used strips from that same pillowcase to make a belt. I took what was left of the hula skirt and cut it into thirds. Then I took those three small pieces and quickly sewed them into one piece of torn pillowcase cloth. Then I braided it together with two other strips to form the belt. I tied this around her waist, it helped to make the too big shirt sort of poof out, and gave her plenty of “straw” bits hanging down. Then I took a strip of cloth and tied it around the bottom third of each sleeve, both to help her look “stuffed” and to help hold everything in place. We topped it off with a pair of kid-sized gardening gloves and a brown triangle nose which I drew on her face using lipstick and an old tube of mascara, because I didn’t even have Halloween makeup on hand. 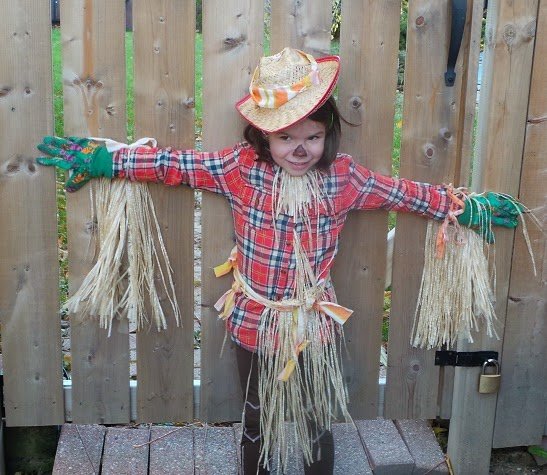 For Halloween she’ll be a little poofier, and warmer, as she’ll have extra layers on under that shirt. I also think I’ll take some scissors to her “straw” pieces and trim them to make them a bit shorter. But basically what I’m saying here is — cut up a hula skirt to make soft, flexible, mom-itchy, straw for a scarecrow costume. This brilliant idea, which I credit to my mom, worked out just perfectly.

What are you guys doing for Halloween? Any cool homemade costumes brewing?

Find out how to #SaveNProtect 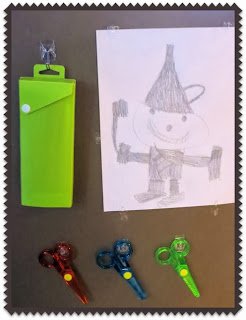